The Top 11 Surefire Resume Writing Strategies That Get RESULTS!

30
Apr
April 30, 2017
by Terry Suffredini
in Job Search for Engineers
no Comments

Even if you’re not, pretend to be.”

I love today’s quote about being brave. I originally saw it under the image of a goldfish swimming with a shark fin attached to its back (didn’t include it here to avoid copyright issues). Imagine, a little fish in a big pond faking people out by appearing to be bigger and stronger than he/she actually was. It made me laugh – and then think.

Isn’t that what we need to do sometimes? 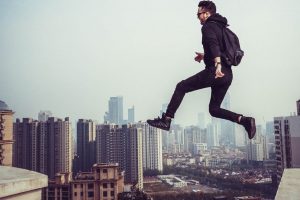 You’ve been without a job for months and have lost confidence in yourself and your worth. You’ve started a new business and just can’t seem to get the revenue stream going. You want to advance to a higher position in your current company but hesitate because you’re afraid you don’t have all the qualifications or think the powers that be won’t consider you for it. You don’t try something new because you know you’re not going to be very good at it at first (like agreeing to be in a golf scramble foursome when you’ve never golfed before (me!)).

I’m sure you’ve heard the term “fake it til you make it.” I personally don’t like feeling like a fake. Instead, I like to think of it as “acting as if, until it becomes natural.”

I had to be brave to do the videos some of you may have seen. Hand me a microphone and let me speak to a group and I’m fine. But put me in front of a camera – Yikes! Unfortunately, the only way out is through. I’ll have to keep practicing doing videos, daring to fail, until I get comfortable doing them.

The funny thing is, that being brave in one area translates to the rest of your life. You practice being brave, taking a chance, in one circumstance and it leads to more confidence in other areas.

So if you need help with this, here are 5 tips to get you started:

If you would like more help developing (or regaining) the confidence you need get ahead, let’s talk.

More from my site

You Know You’re an Engineer If…

You can confuse the salesperson at any consumer electronics superstore

Prior to buying your girlfriend an engagement ring, you confirm the correct ring size by secretly measuring one of her other rings, with a set of calipers

You can name 6 Star Trek episodes

Dilbert is your hero

You’re never wrong and can back it up with facts

You like repairing things more than actually using them

You tried to take the fetal monitor apart in between contractions

Anything by Sean Stephenson is great! He always reminds me that I have no excuses. Here is one example.

The glory of God is man fully alive.

The best work is not what is most difficult for you…It is what you do best.

Don’t be afraid to take a big step…You can’t cross a chasm in two small jumps.

A little bit of reckless abandon is a good thing.

You gain strength, courage and confidence by every experience in which you really stop to look fear in the face. You are able to say to yourself, ‘I have lived through this horror. I can take the next thing that comes along.’ You must do the thing you think you cannot do.

Keep the faith. The most amazing things in life tend to happen right at the moment you’re about to give up hope.

You can fail at what you DON’T want [to be doing], so you might as well take a chance on doing what you love.